The burden of second primary cancers among childhood cancer survivors

Childhood cancer survival has improved dramatically over the past few decades as a result of intensive chemotherapy regimens, radiotherapy, and optimal supportive care. Currently, five-year survival after childhood cancer exceeds 80% in high-income countries (1,2). As a result, the numbers of survivors continue to grow. It has been estimated that the number of childhood cancer survivors will approach 500,000 by 2020 in the United States (US) (3). Unfortunately, treatment such as chemotherapy and radiotherapy, is associated with a lifelong increased risk of severe adverse effects, which can cause substantial morbidity and mortality (4,5). Second primary cancer is one of the most harmful late effects and a leading cause of treatment-related mortality among cancer survivors (6,7).

In a recent report published in the Medical Journal of Australia (8), Youlden et al. investigated the burden of second primary cancers in survivors of childhood cancer in Australia. Using data from the Australian Childhood Cancer Registry, the authors estimated the cumulative incidence of second cancers among children aged 0–14 years when diagnosed with a primary cancer between 1983 and 2013 and followed through the end of 2015. The authors found that among 18,230 survivors, 388 (2.1%) developed a second primary cancer during 228,411 person-years of follow-up (median follow-up time of 10.9 years). The risk of a second primary cancer was five-fold higher among childhood cancer survivors compared to the general population [(standardized incidence ratio (SIR) =5.13; 95% confidence interval (CI), 4.65–5.67]. Risk was similar for both sexes (SIR for males = 4.81, 95% CI, 4.17–5.54 and SIR for females =5.50, 95% CI, 4.78–6.32) and was over 50% higher among children aged 0–4 years (SIR =6.21, 95% CI, 5.31–7.27) compared to those aged 10–14 years (SIR =4.09, 95% CI, 3.45–4.84) when diagnosed with a first cancer. Risk was intermediate for 5–9 years old (SIR =5.53, 95% CI, 4.55–6.73). Importantly, Youlden et al. showed that approximately 80% of treatment-related acute myeloid leukemias and 30% of all second cancers occurred within 5 years after initial cancer diagnosis, highlighting the importance of investigating the incidence of second primary cancers during the earlier years after first cancer diagnosis.

The authors’ findings by sex and age at diagnosis contrast with results from a Childhood Cancer Survival Study (CCSS) (9) report that showed a 40% elevated risk of developing a second cancer in females compared to males and a similar cancer risk between survivors who were diagnosed with a first cancer when aged 0–4, 5–9 or 10–14 years. However, direct comparisons are challenging because of differences in the inclusion criteria and study design. For example, the CCSS included patients aged up to 21 years who survived at least 5 years after first cancer diagnosis, whereas the Australian study included children aged <15 years who survived 2 or more months after first cancer diagnosis. Additionally, the two studies included childhood cancer survivors treated in different time-periods (1970–1986 vs. 1983–2013), which could impact second cancer risk. For example, in the early 1970’s, etoposide was commonly used in the treatment of acute myeloid leukemia, but further studies demonstrated that its use was associated with secondary acute myeloid leukemia (10).

In order to allow for more direct comparisons with the US, we investigated the risk of second cancers among survivors of childhood cancer using data from the US Surveillance, Epidemiology, and End Results 9 program (SEER 9), which includes the following US regions: Connecticut, Detroit, Atlanta, San Francisco-Oakland, Hawaii, Iowa, New Mexico, Seattle-Puget Sound, and Utah (https://seer.cancer.gov/registries/terms.html). We used data from children aged 0–14 years when diagnosed with a first primary cancer, during 1983–2014 and followed through the end of 2016, allowing for the opportunity of at least 2 years of follow-up for the most recently diagnosed children. Childhood cancer was classified based on the International Classification of Childhood Cancer, 3rd Edition (ICCC-3) (11). We excluded patients who were diagnosed at autopsy or on death certificate only. SEER has established rules to classify multiple primaries to guide and standardize the process of determining the number of primaries (12). We estimated SIRs and 95% CIs for second cancers that developed >2 months after initial cancer diagnosis using the multiple primary (MP-SIR) session of SEER*STAT software, version 8.3.6. SIRs calculations compared the observed second cancer incidence with the expected first primary cancer incidence in the general population. The general population rates by cancer site, 5-year age categories, sex, race, and 5-year time periods were utilized in SEER 9. SIRs are presented by cancer site, age group, sex and latency from first cancer diagnosis. 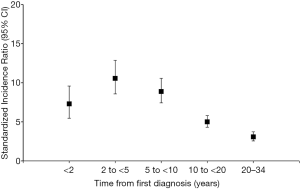 Findings of a higher risk of second primary cancers in cancer survivors diagnosed at earlier ages are supported by a US based study (18) that considered risk of a second cancer among children (0–14 years), adolescents and young adults (AYAs, 15–39 years), and older adults (>40 years) who survived at least 5 years after their initial cancer diagnosis. Using SEER 9 data during 1973–2011, second primary cancer risk was highest among children (SIR =5.36) followed by AYAs (SIR =1.97) and older adults (SIR =1.13). The higher risk among younger cancer patients may relate to genetic predisposition (e.g., Li-Fraumeni syndrome), more years of life due to longer survival after the first cancer diagnosis, or a higher sensitivity of tissues/organs to the toxic adverse effects of radiation and chemotherapy (18,19). A dose-dependent increased risk for solid cancers following radiation is well established (20). In addition, there are well-known associations between chemotherapy and hematologic second cancers, particularly for treatment-related acute myeloid leukemia and treatment-related myelodysplastic syndrome, with dose-dependent exposures to alkylating-agents and topoisomerase II inhibitors (21). Chemotherapy also has been found to increase the risk of second primary solid cancers. Using data from the Dutch Childhood Cancer Oncology Group-Long-Term Effects After Childhood Cancer cohort on survivors diagnosed with a first cancer during 1963–2001, a recent study showed strong evidence that doxorubicin exposure was associated with a dose-dependent increased risk of female breast cancer and cyclophosphamide was associated with a dose-dependent elevated risk of sarcoma (16).

Over the years, efforts have been made to decrease the intensities of chemotherapy and radiation in order to mitigate the late effects of cancer treatment. A large study involving more than 23,000 survivors of childhood cancer from the US and Canada (22) evaluated whether changes in chemotherapy and radiation over the last three decades were associated with reduction of subsequent primary cancer risk. This study demonstrated that the risk of subsequent cancers was lower among those diagnosed during the 1990s compared to those diagnosed during 1970s, and lower risk was associated with reduction of radiation dose. Despite lower risks, risk remained elevated at 15 years after first cancer diagnosis. Future studies are needed to monitor the impact of evolving therapeutic approaches on the risk of second primary cancers.

Taking together, these findings underline the need for an appropriate survivorship care plan for long-term follow-up and surveillance of cancer survivors. In 2010, the International Late Effects of Childhood Cancer Guideline Harmonization Group was initiated to provide recommendations for the long-term follow-up of childhood and young adult cancer survivors (23). This initiative aims to determine who needs surveillance, the age or time from exposure that surveillance should start, the frequency of surveillance, the surveillance modality that should be used, and the effective treatments available for identified health problems. To date, several guidelines have been developed, including surveillance recommendations for breast (24) and thyroid cancers (25).

In order to improve the prevention, early detection and treatment of second primary cancers, it is necessary to increase awareness of the health risks associated with treatment of childhood cancers for both adult survivors of childhood cancers and oncologists and primary care doctors who provide ongoing care for these patients. Additionally, to better understand the effects of cancer therapies on second cancer occurrence and improve the development of appropriate recommendations for long-term surveillance of second cancer, it is vital to link population-based data with detailed treatment and risk factor information. This would move us a step further on the care of cancer survivors and ultimately reduce early mortality and improve the quality of life of these patients.

Conflicts of Interest: All authors have completed the ICMJE uniform disclosure form (available at http://dx.doi.org/10.21037/ace-2020-01). The authors have no conflicts of interest to declare.