Mediastinal neoplasms are uncommon tumors. They often present a diagnostic and therapeutic challenge for treating oncologists. Significant advances in the evaluation and diagnosis of these lesions have occurred in recent times, with the introduction of computerized tomography (CT), interventional radiology biopsies, tumor markers, and immune-histochemical techniques. Multimodality treatment has contributed to improved survival for some malignant mediastinal tumor histology, however the overall prognosis remains dismal. This is a review of all the mediastinal tumors received and treated in our Regional Cancer Centre (RCC). The purpose of this analysis was to evaluate distribution of mediastinal tumors, the factors affecting the treatment intent, and understanding the reasons behind the generally known poor prognosis.

We performed a retrospective review of all patients with mediastinal masses registered, evaluated and treated at our RCC from January 2011 to December 2014. Records were reviewed for patient demographics, clinical presentation, tumor characteristics, and patient management. Pediatric patients were defined as those less than 18 years of age. Lymphomas that were confined solely to the mediastinum only were included. Descriptive statistics were used to evaluate the distribution of tumors in-terms of patient characteristics, tumor characteristics and treatment characteristics. First reported predominant symptom was documented as presenting symptom, however some patients presented with constellation of symptoms including facial swelling, dyspnea and cough along with radiological features of superior vena cava obstruction (SVCO) and hence they were documented as such. Tumor location was designated as anterior, superior, middle, or posterior mediastinal (1) as per standard teaching, however in cases with a large tumor bulk transversing from one region to another a combined designation was given.

Review of patients’ treatment based on the clinicians’ intention of treatment was conducted. Two groups were made where distinction was made whether they were treated with a radical or a palliative approach. Correlation using cox regression analysis was done to evaluate the factors affecting the intention of therapy (radical vs. palliative) of overall treatment.

A total of seventy-one (n=71) patients were identified who received treatment at our institute. Table 1 shows patient characteristics of mediastinal tumor. Data shows a median age of 45 years with a male preponderance (69%), majority of patients come from rural areas (81.7%). Table 2 shows the demographic distribution, location, histology, bulk and the presenting stage of tumors in mediastinum. The miscellaneous tumors include, one each of paraganglioma, spindle cell carcinoma, poorly differentiated carcinoma and two patients who couldn’t undergo biopsy or surgery for confirmation of diagnosis. 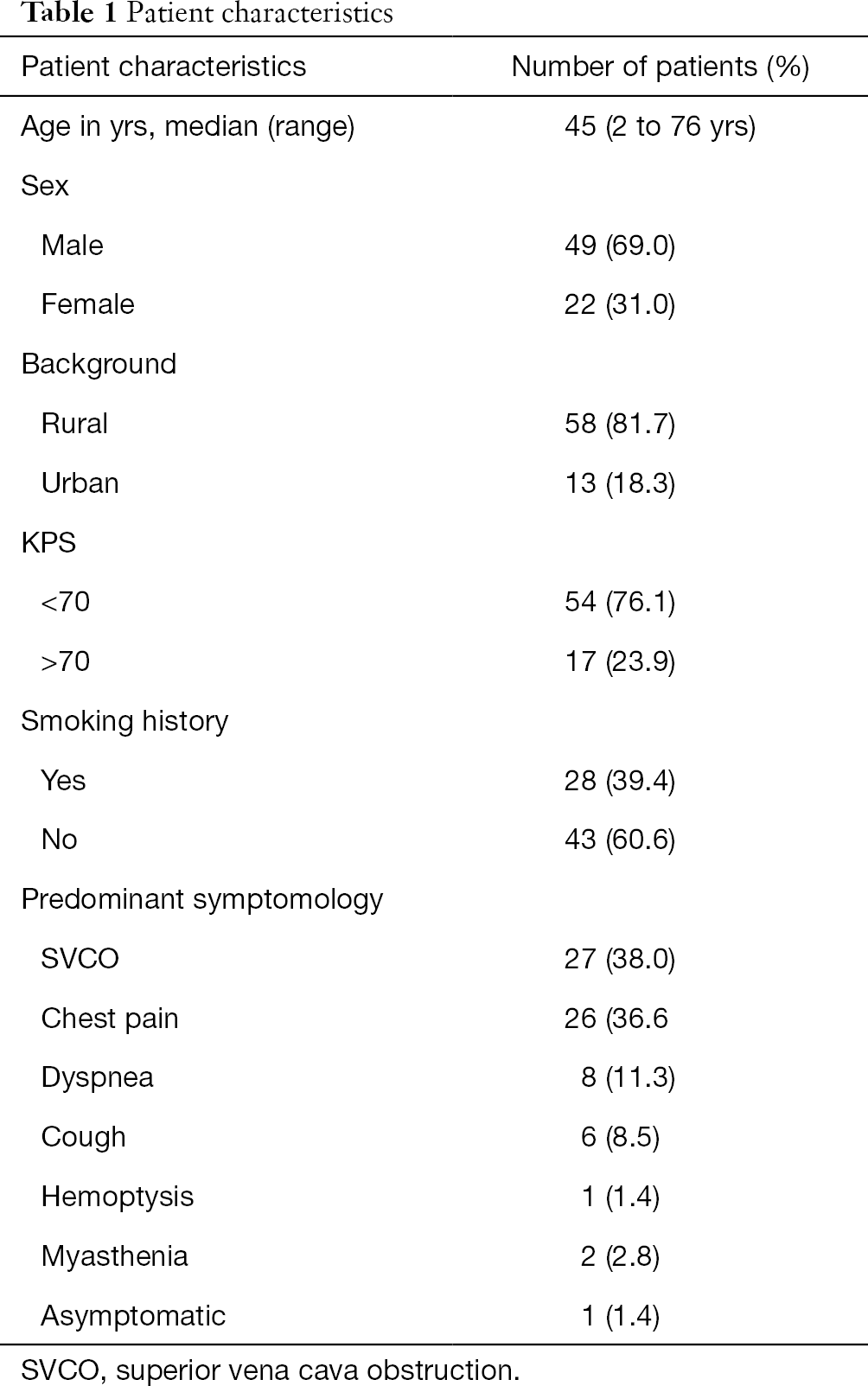 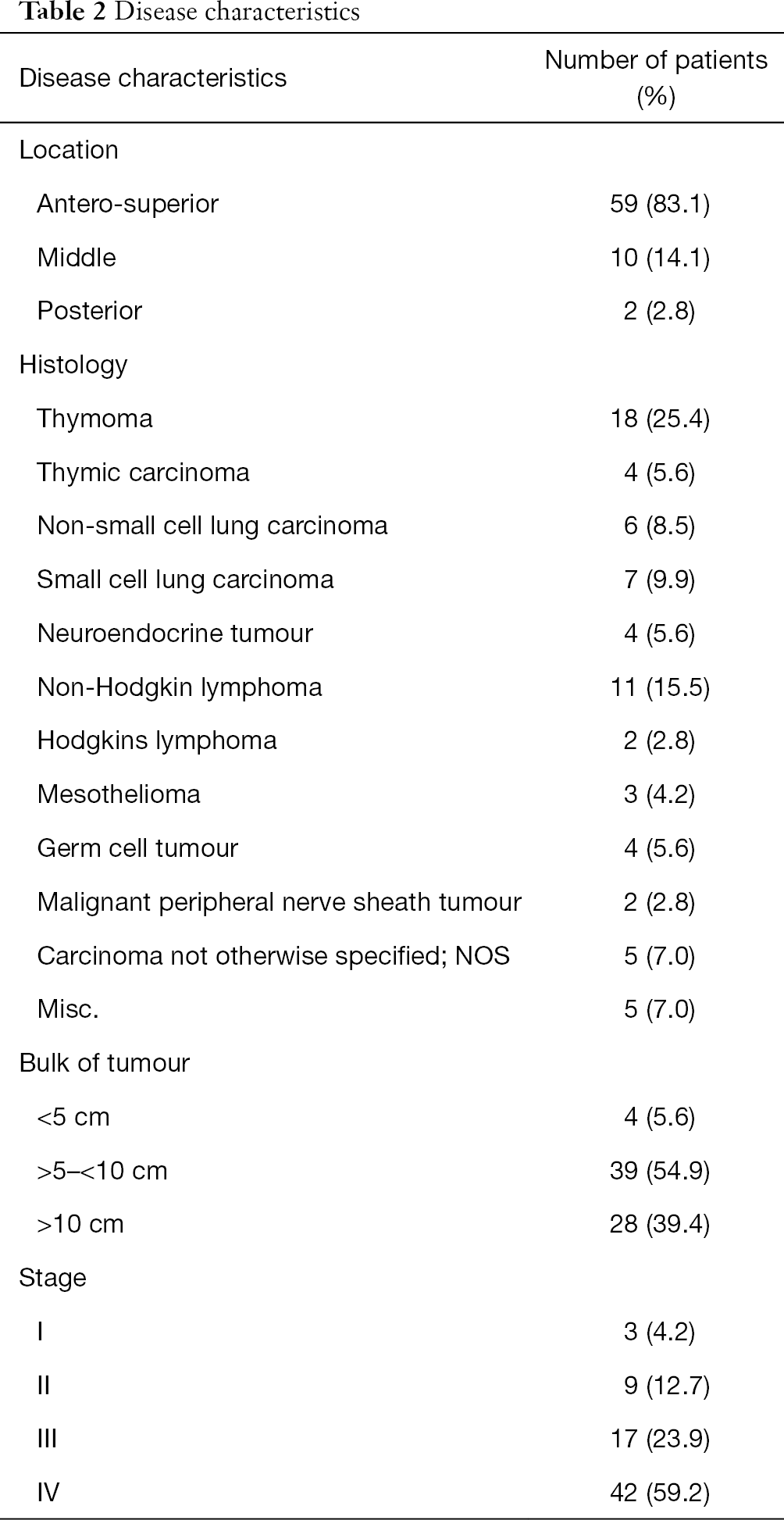 With respect to treatment of mediastinal tumors, surgical consult was the primary treatment approach whenever indicated. However, for tumors like lymphoma, germ cell tumors, small cell lung cancers and patients presenting with SVCO, primary treatment was non-surgical. Out of the 71 patients, 49 patients had a surgery consult out of which only 15 (19.7%) were found suitable for surgical intervention and underwent surgery. However only 4 (26.6%) of them had complete resection (R0 resection). Adjuvant or upfront radiation was received by 58 (81.7%) patients, 33 of which (56%) were amenable to radical doses. Forty-two (59.2%) patients were initiated on chemotherapy out of which 34 (80.9%) completed four or more cycles. Table 3 shows the treatment received by the patients. 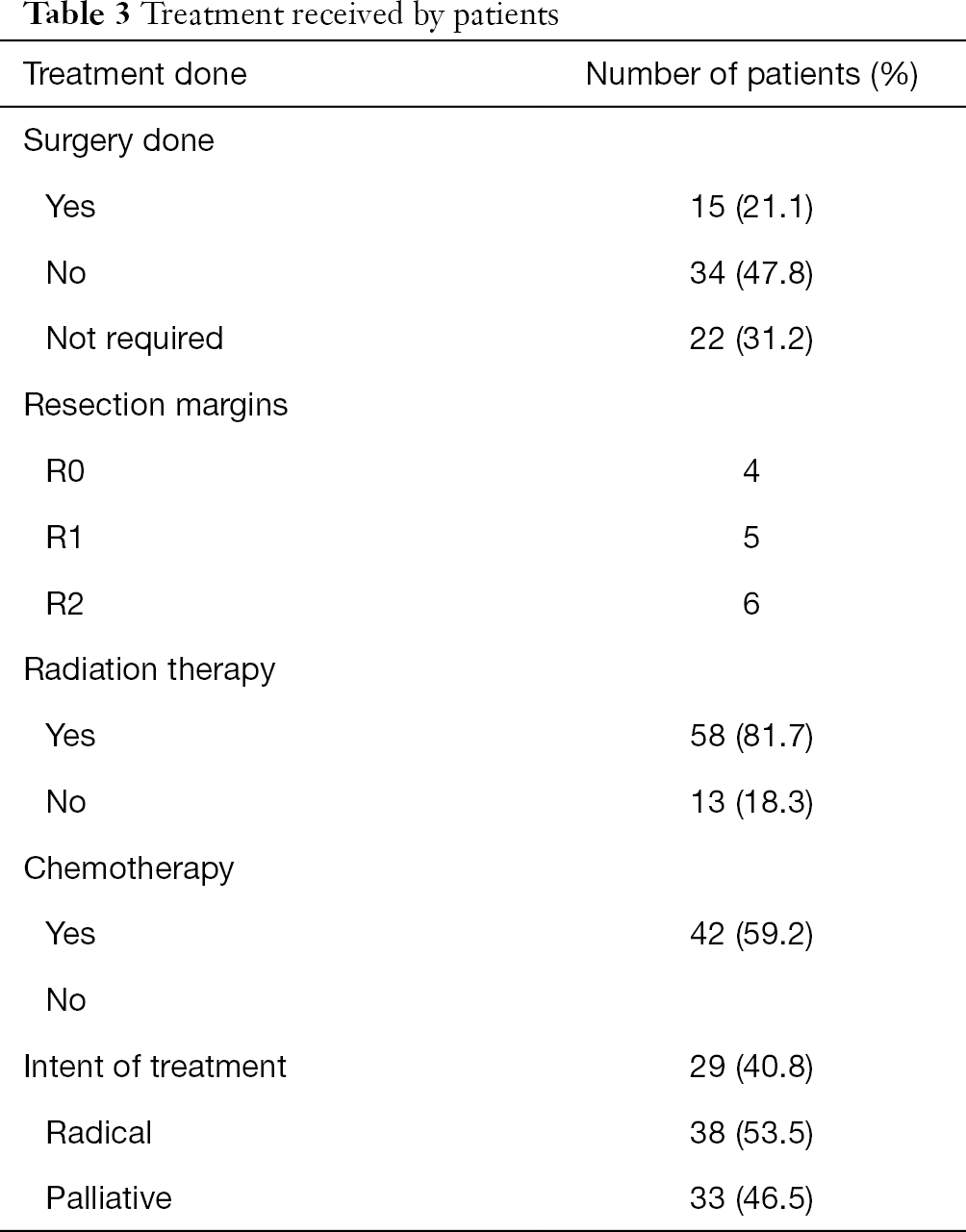 Radiation dose varied in palliative setting ranging from 8 Gy/# to 30 Gy/10# and the radical dose varied according to tumor histology as per our institutional protocol (data not shown). Chemotherapy used were different for different malignancies and hospital protocol based.

For treating a patient with either radical or palliative approach, various factors responsible were studied. Table 5 and Table 6 give the patient related and disease related factors that dictate the clinicians approach in managing mediastinal tumors. 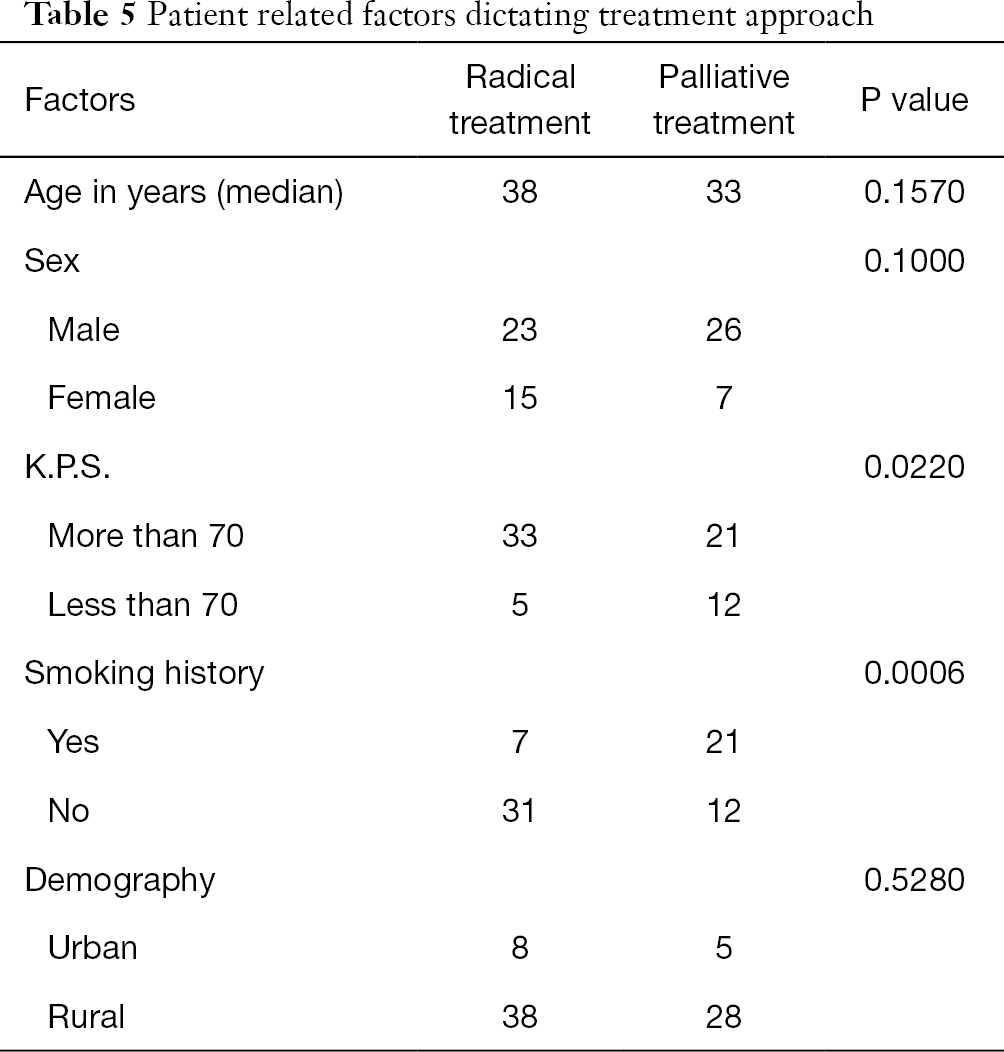 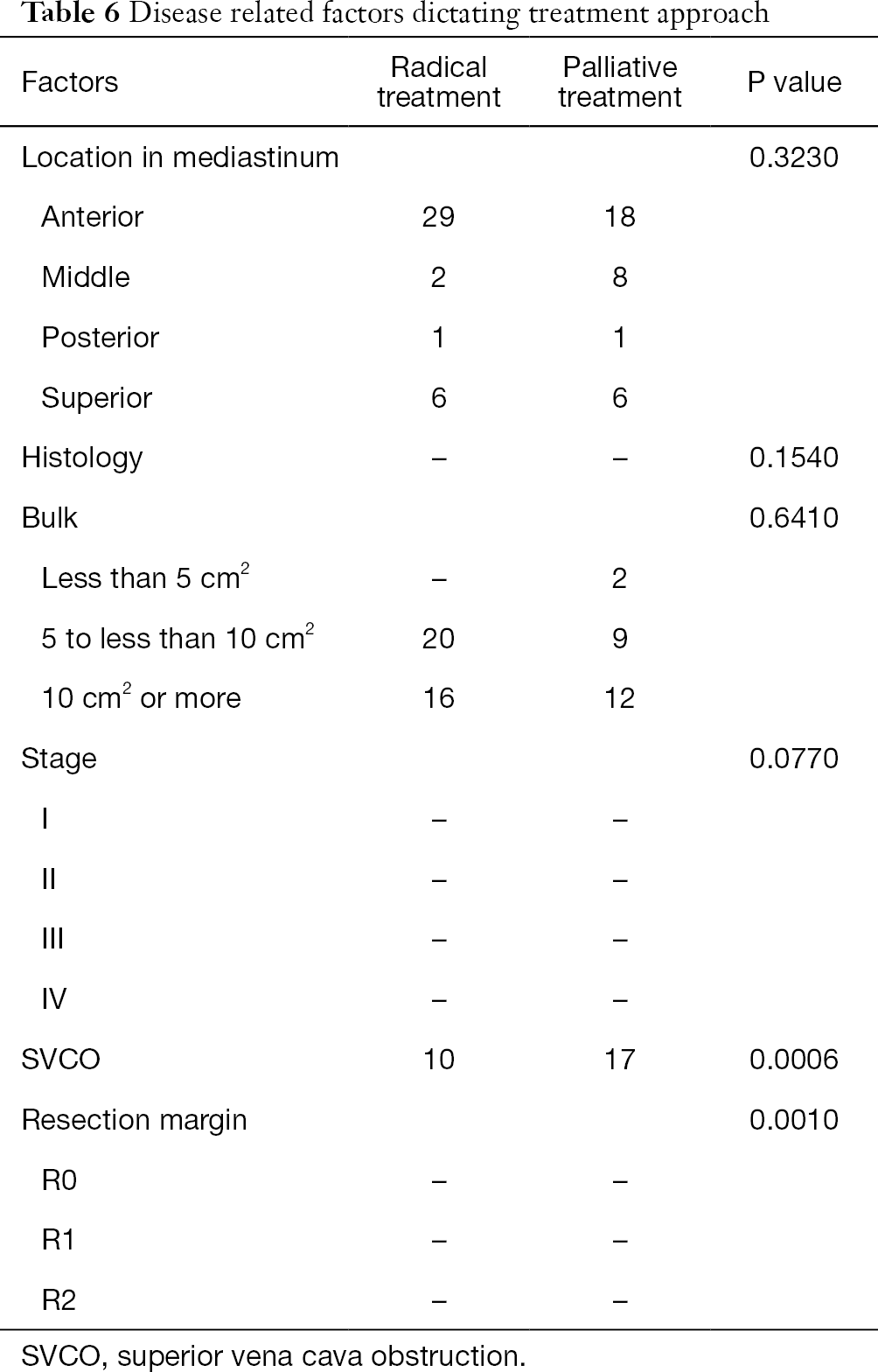 Mediastinum is a unique location for cancer symptomology and therapeutics. The clinical symptoms range from subtle heaviness of chest to marked dyspnea leading to what is known as superior vena-cava syndrome. This retrospective review doesn’t show much similarity to demographic, clinical presentation, and tumor histology data to that previously published from other institutions (2-11). Our proportion of lung tumors, lymphomas, are generally lower than reported in other series. This may reflect our tertiary cancer hospital referral pattern and the fact that-our policy of only including primary mediastinal lymphomas is probably responsible for this. The presenting stage and bulk of tumors also seems higher than what can be anticipated from other series.

The diagnosis was established with CT or bronchoscopy guided FNAC or biopsy, post-surgical specimens, VATS (video assisted thoracoscopy). However, due to the retrospective nature of the study, accurate frequency of these procedures cannot be commented upon.

We observed a high proportion of patients i.e., 39.4% with bulky disease (defined by volume of disease more than 10 cm3) and 59.2% were with stage IV tumors. The frequency of these large sized, locally infiltrative lesions is far greater than the average number seen throughout the world. Performance scale of the patients coming to our tertiary care center also seems to be the major cause for concern as proportion of patients with K.P.S. score of less than 70 was about 24%, a higher percentage than standard population. Low KPS scores can be explained by delay in the diagnosis of disease. The factors associated could be, initial nonspecific symptoms leading to delay in consultation, delay at primary health centers due to lack of awareness among health workers for such rare presentations and complex methods of diagnosis (13,14); leading to delay in diagnosis and eventual long duration of illness. Smoking habits also contribute to the low KPS scores. Eighty-three point one percent patients had locally advanced disease and the compounding factor was their poor performance status as 76.1% of them had a KPS of <70.

An important predictor of survival from the treatment point of view is the intent of treatment. If the treating physician feels that the patient will benefit from and is suitable for a radical treatment, then it can be expected that a few of such patients can have long term survival. The analysis reveals that only around 53.4% of the patients were treated with a radical intention and the rest were treated with a palliative approach. With this review of the data, the attempt was aimed at identifying the factors that are responsible for determining the intention of treatment.

Among all the factors studied in multivariate analysis, low KPS, smoking index >400, presence or absence of SVCO, stage of the tumor (stage I and II versus III and IV) and resection margin (positive versus negative) came out to be the significant contributors toward determining the intention of treatment. Age, sex, duration of illness (more than or less than 3 months), demographic background (rural or urban), bulk of tumor were the notable factors that didn’t show any statistical significance in decision making during the analysis.

The presence of SVCO in 38% of our patients with mediastinal tumors, though seems increased, is confounded by the referral system of our institute where SVCO is primarily managed by radiation therapy. Presence of SVCO makes the management decisions more complex and inadvertently more in favour of a palliative approach. Reasons for this can be the lack of surgery as primary treatment, initial focus on providing symptomatic relief leading to change from the standard protocol for the disease, higher stage of the disease, associated with low performance status of the patient; leading to reluctance in the use aggressive multimodality approach (15,16).

Stage is also an important prognostic factor in most malignancies. Stage of tumor not only dictates the symptomology and performance score (17), it also is an indicator of tolerance of the patient towards a treatment, its response to therapy and eventual outcome.

Surgical approach whenever leading to a R0 surgery has also shown to impact the decision making, in this analysis. These patients may be the ones that are now symptom free and of a good KPS score, so a selection bias may be one reason. Besides this, after bulk tumor removal the treating oncologists’ confidence in getting long term control are increased and a further use of adjuvant therapy is also often minimized.

No long-term survival analysis was done because of poor follow up and heterogeneous population. Being a retrospective study, a selection and a recall bias can’t be fully excluded.

Mediastinal tumors are a group of heterogeneous tumors and require diverse approaches with multimodality therapy. Often there is a delay at diagnosis due to innumerable causes and whenever patient comes to the tertiary care center to seek treatment, more often than not, the stage, resectability and the general condition of such patients makes cure improbable. Palliative approach with the use of palliative dose of radiation, chemotherapy and various symptom oriented management strategies in these patient remains the mainstay of treatment in most of these patients. Thus, there is a need to address the disease entity as a site-specific problem rather than individual diagnostic and treatment problem.