Biological and epidemiologic updates on lip and oral cavity cancers

Biological and structural introduction on lip and oral cavity cancers

The oral cavity is conventionally defined as an area extending from the lips within a circular region at the back, which comprises the circumvallate papillae on the dorsum of the tongue, the frontal tonsil pillars, up to the hard and soft palate junction (1). Oral cavity cancers are hence designated as those developing in this specific anatomic area, and substantially include malignancies of the lip, gum, tongue, mouth (including the floor) and palate, corresponding to the International Classification of Diseases (ICD)-10 codes C00-06.

Among all lip and oral cavity cancers, squamous cell carcinomas are indeed the prevailing histological types (i.e., between 85–95% of all cancers in this anatomic district), followed by cancers of minor salivary glands, (e.g., mucoepidermoid and adenoid cystic carcinomas), basal cell carcinomas, mesenchymal malignancies, hematologic tumors and melanomas (2-4). Oral cavity cancers may develop either ex novo or evolve from pre-malignant dysplastic lesions, which clinically appear as erythroplakia, leukoplakia, submucous fibrosis and lichen planus, along with possible combinations of these conditions (3). In all such cases, reiterated exposure to some well-known carcinogens such as alcohol, tobacco, diet low in vegetables and fruit, excessive sun exposure and/or human papilloma virus (HPV) infection may promote malignant transformation (2). Notably, a large retrospective analysis published by Sundermann et al. and including 1,501 patients with oral cavity cancers diagnosed between the years 1975–2009 revealed that approximately 60% of such cancers developed in current smokers or regular alcohol consumers (5). Recent evidence has also been provided that nut chewing may be an important risk factor for oral cancers, especially in Asian populations (3).

Squamous cell carcinomas in oral cavity may develop as either verrucous or basaloid malignancy, the latter being characterized by a worse prognosis. Oral cancers are categorized typically according to specific histopathologic subtypes, encompassing keratinisation, cellular atypia, nuclear pleomorphism and mitotic activity, thus being finally classified into well, moderately or poorly differentiated forms (2). The very recent retrospective analysis of Sundermann et al. revealed that floor (22% of all cases) and anterior base (21% of all cases) of the mouth were the most common sites of occurrence, followed by alveolar process (18% of all cases) and edge of tongue (15% of all cases), whilst hard palate was found to be a frequently involved anatomical area in maxilla (5). As regards lip cancers, nearly 90% of the tumors develop from the lower lip, 7% from the upper lip, whilst 3% onset from the oral commissure.

The natural history of oral cancers encompasses deep invasion of local structures, frequent propagation to local lymph nodes of the neck and further distant metastatization. Importantly, early stages cancer do not usually generate pain or specific symptoms and are hence frequently unnoticed by most patients, at least until tumor growth generates functional problems or obvious symptoms. This explains why most of these cancers, up to 50%, are diagnosed in stage IV and less than 25% are diagnosed in stage I (5). Detailed information on staging criteria, along with a recent dissertation on the leading drawbacks of the staging system, is available elsewhere (6). Oral cavity and lip cancer are characterized by a high risk of recurrence; patients surviving a first malignancy have a nearly 20-fold higher risk of developing a second cancer 5–10 years after the first occurrence (1-3). 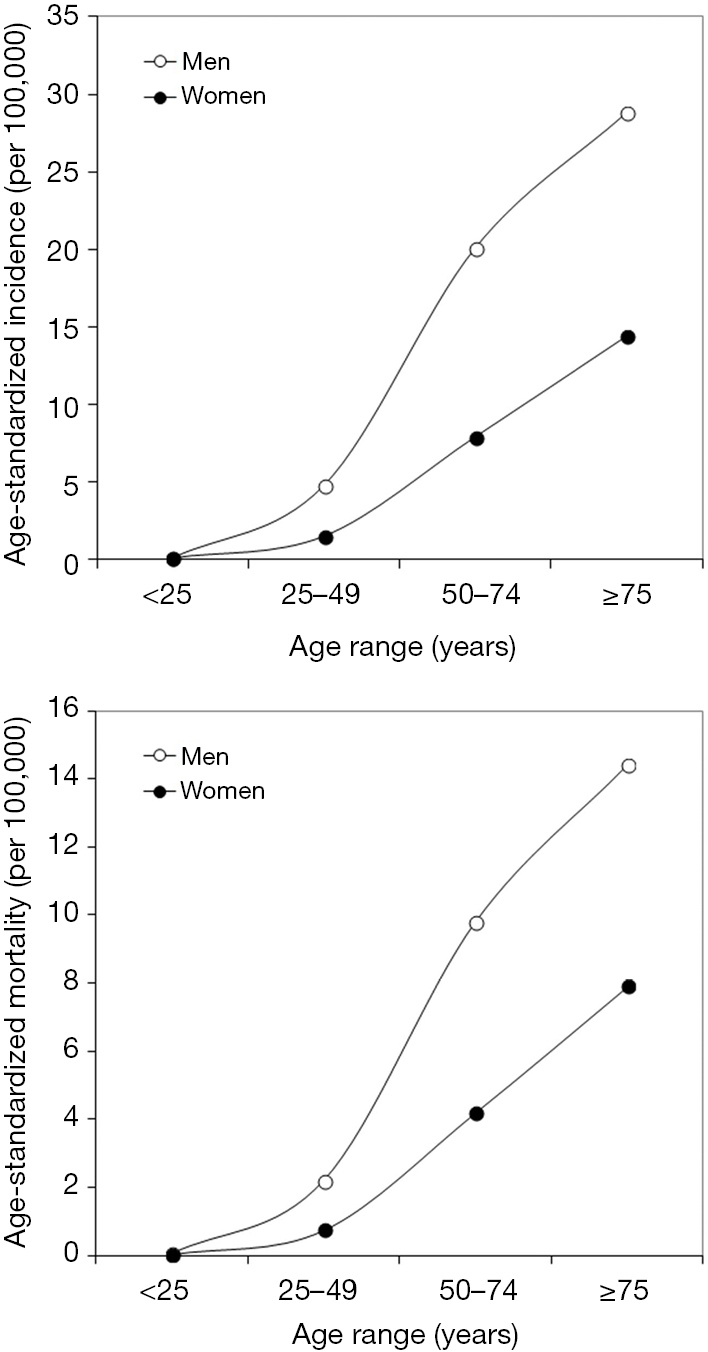 Figure 1 Worldwide incidence and mortality of lip and oral cavity cancers in the two sexes and across different age groups. 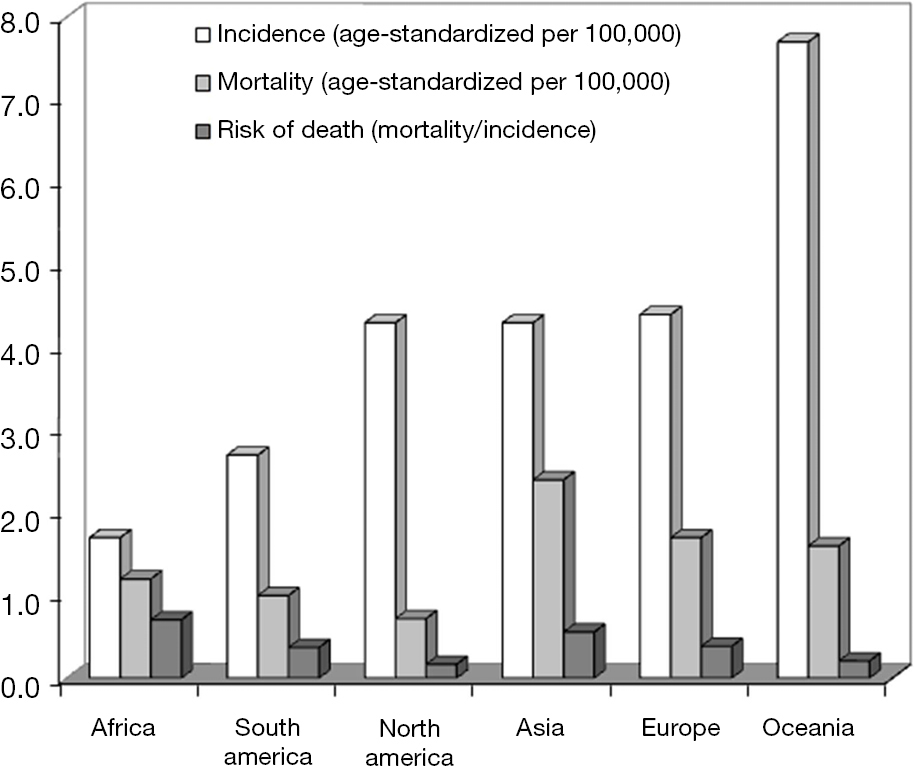 Figure 2 Worldwide distribution of the age-standardized incidence and mortality of lip and oral cavity cancers. 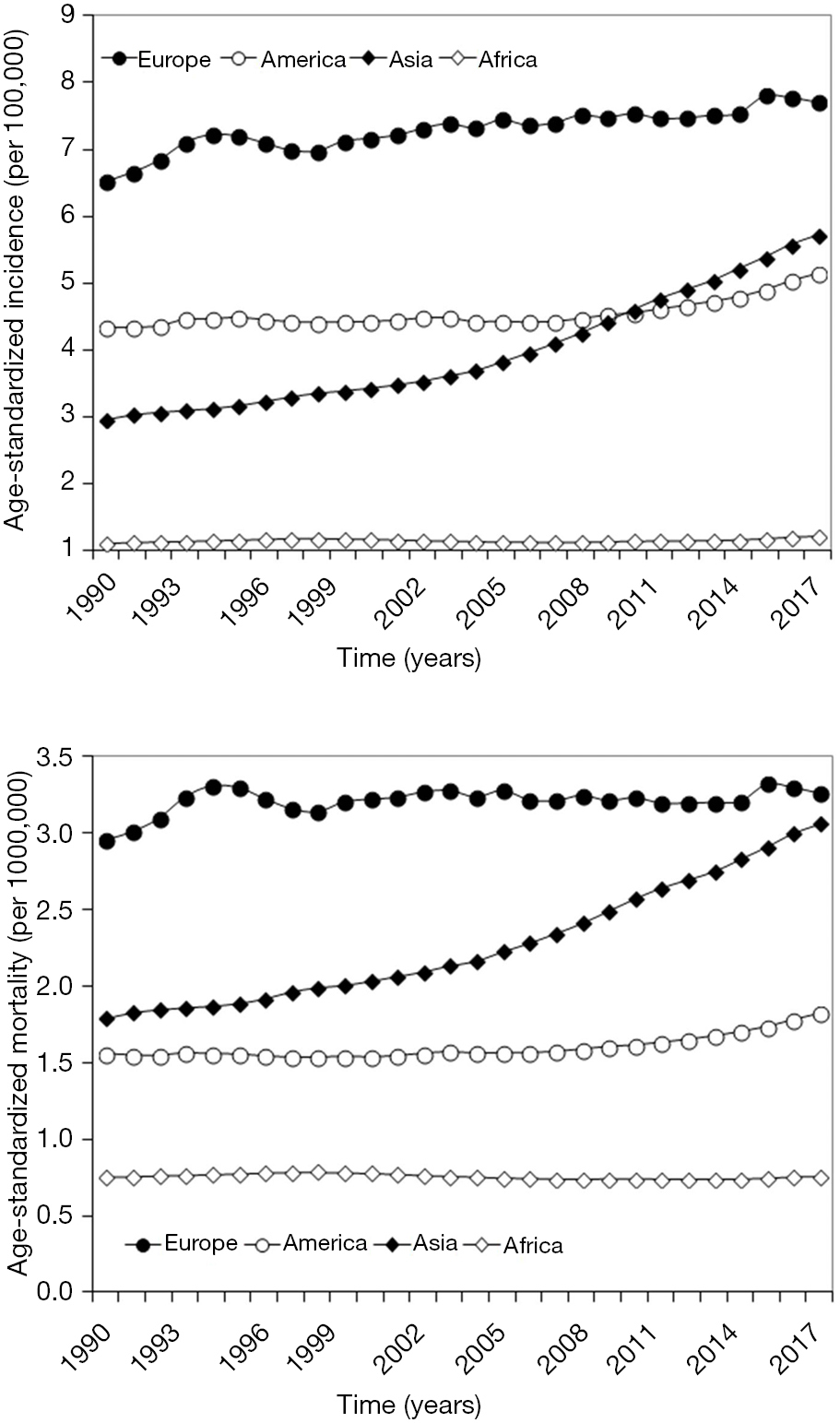 Figure 3 Incidence and mortality of lip and oral cavity cancers across different geographic areas during the last 3 decades.

According to the most recent IARC statistics (7), a total number of 177,384 people die each year for lip and oral cavity malignancies, accounting for a cumulative age-standardized mortality of 2.0 per 100,000 and actually translating into a 50% worldwide risk of dying after developing these types of cancers. Of the cumulative number of deaths, 119,693 involve men and 57,691 women, thus accounting for an age-standardized incidence of 2.8 per 100,000 in the male sex and 1.2 per 100,000 in the female sex, respectively. 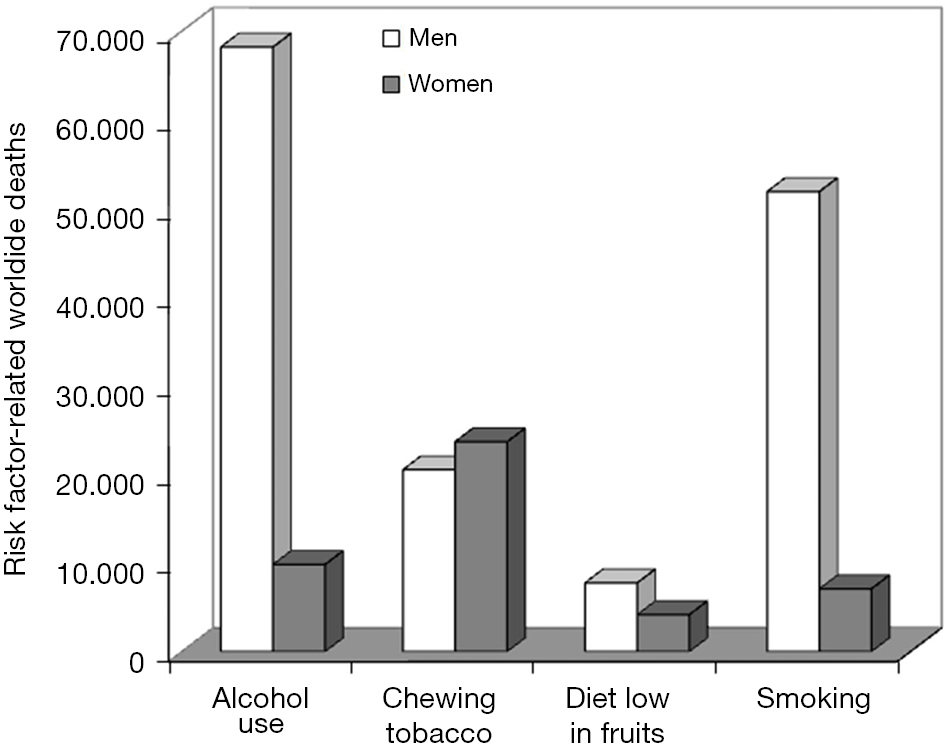 Updated prognostic information on lip and oral cavity cancers are available from, and regularly updated by, the American Cancer Society (ACS) (10). According to data collected between the years 2008 and 2014, the cumulative 5-year relative survival rates for lip, tongue and mouth floor cancers are 88%, 66% and 53%, respectively. More specifically, the survival rate is as high as 78–92% in patients with localized cancers, decreasing to 39–67% in those with regionally disseminated cancers (i.e., spread to nearby structures or lymph nodes), becoming as low as 19–39% in those with distant localizations (i.e., lung, bone and even heart colonization). Notably, a recent report by Cheraghlou et al. has highlighted that the overall prognosis of either early- or late-stage oral malignancies has considerably improved during the past 20 years (11). More specifically, 3-year survival has increased from 78.0% to 92.2% in patients with early-stage cancer, and from 51.9% to 70.3% in those with late-stage cancer, respectively. Interesting data were also recently published by Chen et al. (12), who systematically reviewed over 3,300 consecutive cases of oral cancers and showed that 5-year overall survival was the highest for lip cancers (i.e., 71.4%), followed by malignancies developing from tongue (56.3%), hard palate (48.1%), buccal mucosa (44.8%), mouth floor (42.1%) and gums (38.7%). Likewise, squamous cell carcinomas were characterized by a 5-year overall survival of 51% compared to 70% for minor salivary gland carcinoma and 46% for other types of oral cancers.

The 1990–2017 trends of incidence and mortality of lip and oral cancers are shown in Figure 5 (8). Incidence and death rate have both increased by 1.48- and 1.40-fold during the past three decades. The third-degree polynomial models developed to fit these trends are highly statistically significant (P=0.998 for both incidence and mortality), thus allowing us to estimate the possible epidemiologic burden of these cancers in a 30-year projection. Provided that the trend will not significantly change, it can be calculated that incidence and mortality for lip and oral cavity cancers will approximate 16.6 per 100,000 and 7.3 per 100,000 by the year 2050, respectively. Nevertheless, these projections shall be taken with caution whereby the incidence of oral cancers in most countries with high burden of these conditions has almost reached a plateau. 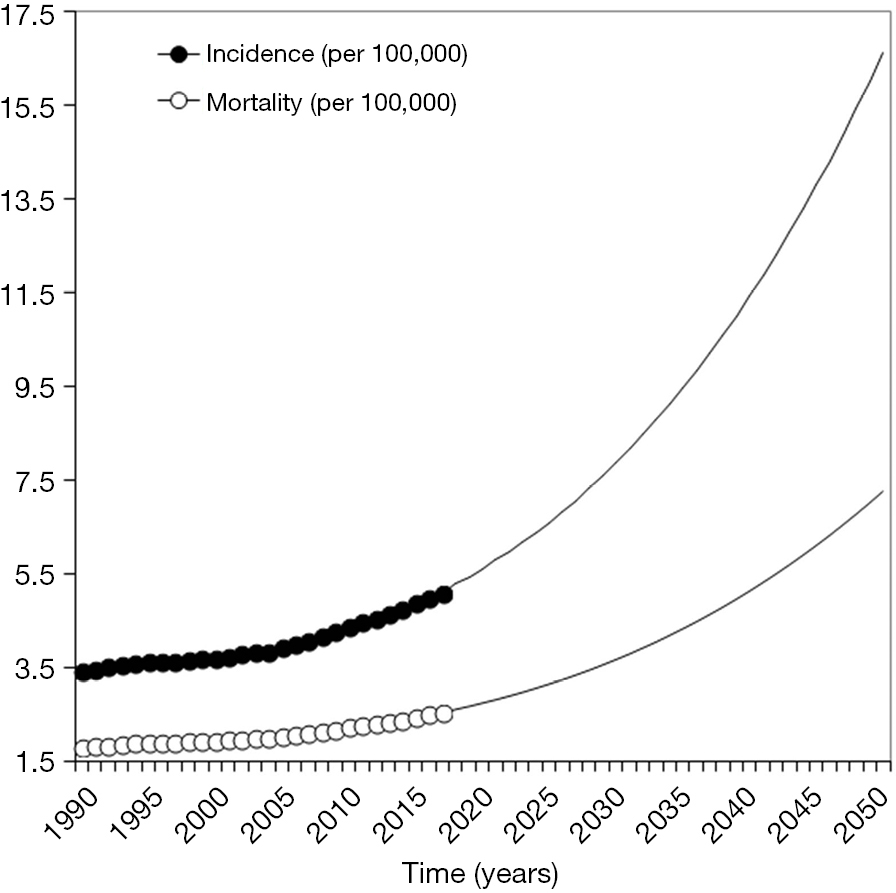 Figure 5 Trends of worldwide incidence and mortality of lip and oral cavity cancers during the last 3 decades and year 2050 projection.

Taken together, the current epidemiologic data confirm that lip and oral cavity cancers remain important health care issues, whose clinical, societal and economic burden could be significantly reduced by strategic population-based policies aimed at limiting the impact of some modifiable risk factors, namely tobacco use and alcohol intake. The adoption of preventive measures aimed at reducing the impact of these factors will be especially important considering the recent escalating trend, as well as the further estimated increment of epidemiologic burden during the next 30 years, as shown in Figure 5.

The specific analysis of the current epidemiologic data reveals some important aspects. First, these types of cancers are especially frequent in men, displaying age-standardized incidence and mortality that are nearly double than in the female sex. The age-related risk of developing lip and oral cavity cancers then exponentially grows in parallel with ageing, so that these malignancies mostly characterize the advanced age. Basically, the risk of lip and oral cavity cancers appears over 150-fold higher after the age of 75 years compared to subjects aged 25 years or younger. The combined analysis of incidence and mortality also highlights that the death rate remains particularly high. This is not really unexpected, since the high mortality associated with these cancers is a combination of various factors such as the lack of comprehensive programs of opportunistic screening, patient underestimation of newly developed lesions, insufficient education on systematic diagnosis and monitoring of precancerous conditions, as well as gaps of medical or surgical management in certain parts of the world, which would also ultimately explain the dramatically high death rate observed in low income countries, especially in Africa and certain parts of Asia. Interestingly, our analysis reveals that tobacco chewing may explain up to 50% of cumulative mortality for lip and oral cavity cancers in women. A recent meta-analysis confirmed this seemingly unpredicted finding, revealing that a highly significant association can be observed between use of smokeless tobacco and oral cancers, and that such risk is over 2-fold stronger in women [odds ratio (OR), 2.72; 95% CI confidence interval (95% CI), 1.73–4.27] than in men (13).

In conclusions, despite notable improvements have been garnered during the past decades in the survival rate of lip and oral cavity cancers, mostly attributable to higher nodal yields from performed dissections and enhanced use of neck dissection and chemoradiotherapy as adjuvant treatment (11), the epidemiologic burden of these malignancies is predicted to grow further in the foreseeable future. This will be mostly attributable to the resilient impact of some its most well-recognized risk factors (i.e., tobacco and alcohol), whose consumption is continuously escalating in certain parts of the world, especially in Asia (14).